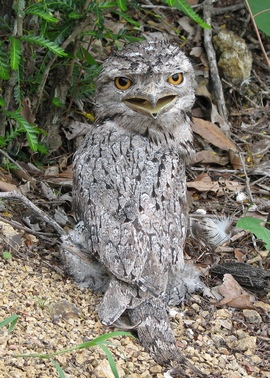 Male Tawny Frogmouth protecting chick by sitting on it

There was a pair of nesting Frogmouths in the bush below the Ross River Dam spillway. The nest was about 5 metres up a straggly tree and occupied by the male and one chick. One afternoon I went down to see how they were getting on. When I got there my heart sank as I could see from a distance that there was no chick in the nest. When I got closer I could see the adult female in her usual spot in a low shrub near the nest tree happily snoring her head off but I could not sight the male. After a few minutes of searching I found him on the ground at the base of tree that the nest was in. A closer inspection revealed that the he had the chick under him as if he was in the nest. The male and the chick (which still had only downy feathers) were fairly well exposed to predators and the weather if it rained; which it looked like doing.
I sat there for a while trying to work what was the best thing to do for the welfare of the chick. Should I just let nature take its course and leave them be or intervene and do something. Thinking of dingos and feral cats that inhabit the area I decided that the chick must be returned to the nest if it was to have a chance to live and play hide and seek with the local bird watchers in the future. 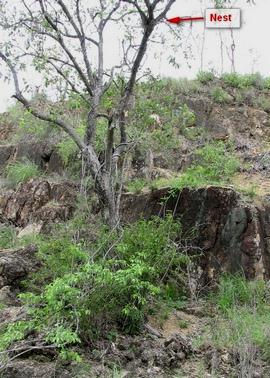 In the end I decided to play Tarzan and attempt to climb the tree and put the chick back in the nest. Well it took a lot of gentle persuasion to get the male off the chick. In the end, after a bit of hissing and snapping on his behalf, he flew into a tree about 10 metres away. I had a plastic shopping bag in me pocket to protect my camera if it rained. The bag became a cradle for the chick and just like the “baby carrying stork” I put the handle of the plastic bag containing the chick in my mouth (hope nobody was spying on me) and with a lot of huffing, puffing and scrambling I manage to climb the tree and in dainty “baby carrying stork” fashion I placed the chick (which was doing a bit of chirping and wriggling around in the bag by this stage) into the nest. Sweating profusely and getting close to needing a couple of sucks on my Ventolin inhaler I got down from the tree and, after inspecting what looked like a gravel rash on me stomach and chest, collected my things and moved about 50 metres from the nest hoping that the male would return. After about 45 minutes it started to rain and he had not returned so I thought if I approached the nest slowly his maternal instincts might click in and he would fly to the nest to protect the chick. This drew a blank so; seeing the chick seemed to have settled down and looking okay I departed the scene and left them to it.

The next morning I went down early to check the nest and to my relief dad and bub were in the nest. I approached a little way and I’m sure that I was not seeing things when the male gave me a nod and a wink as if to say thanks for the effort. Gee I felt good!! 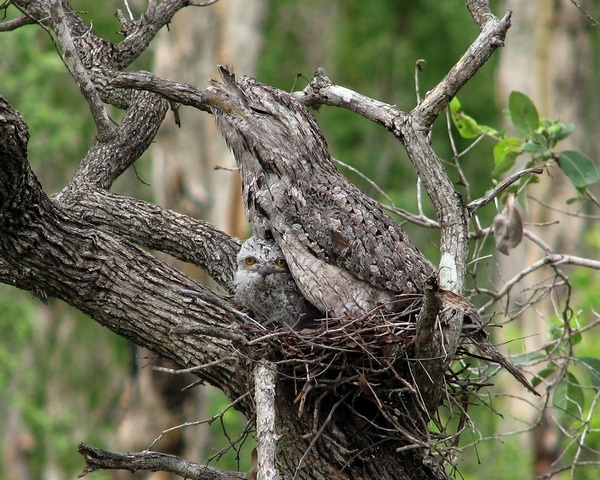